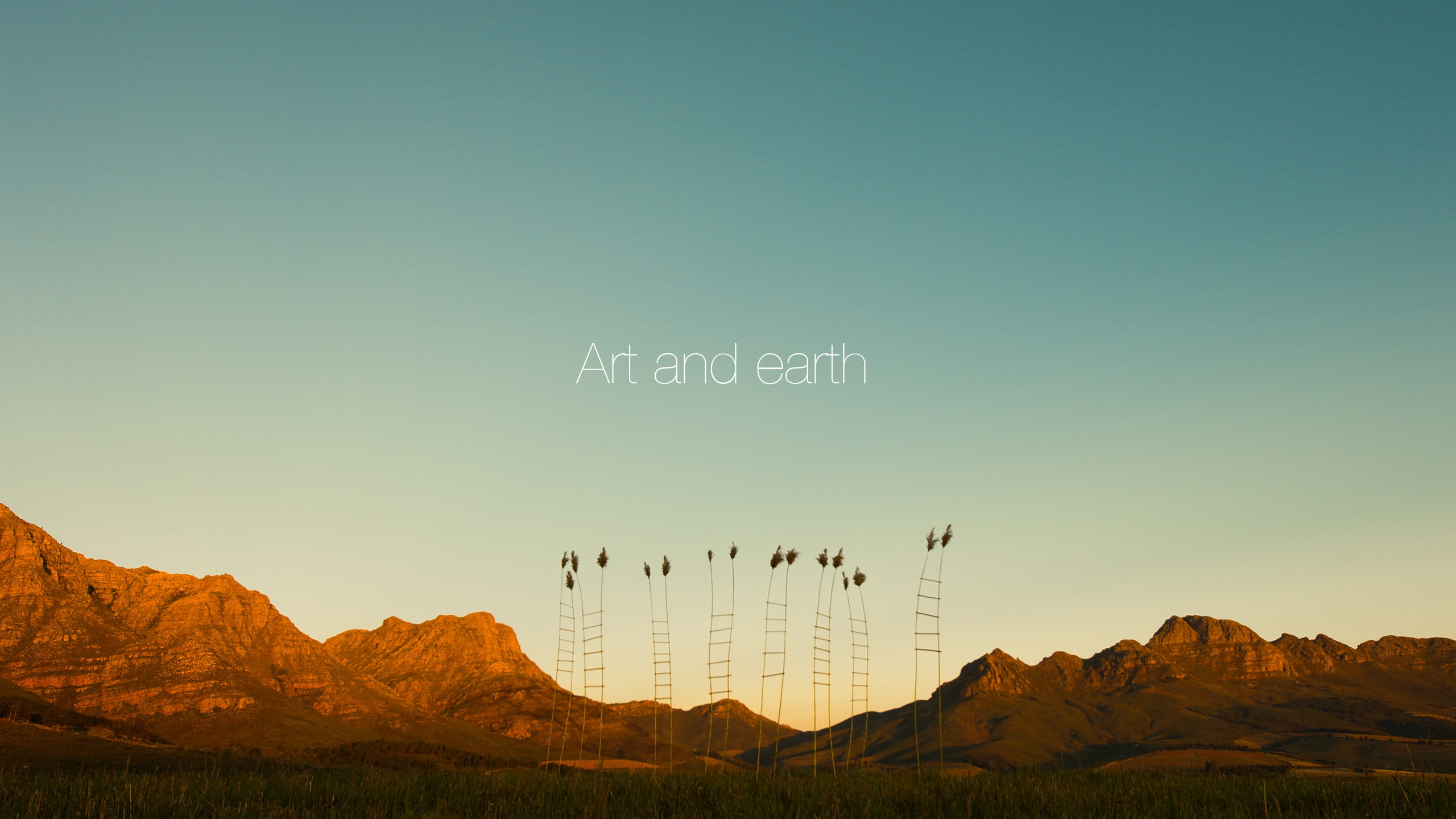 Sculpting This Earth is one of only a handful of feature-length films about land art worldwide to date, and the first from the southern hemisphere. Director Victor van Aswegen outlines the art-historical context and sketches the background to the project.

The land art movement was born in tumultuous times. The 1968 student protests in Paris and on American campuses, the US civil rights movement, growing resistance against the brutal ongoing war in Vietnam, 400,000 people gathering on a farm in upstate New York for the Woodstock music festival – it was against the backdrop of these era-defining social and cultural upheavals of the late 1960s and early 70s that the first practitioners of land art did their pioneering work.

In the spirit of the time, these artists pushed the boundaries of what could be considered art, rejecting the notion that it should be confined to the gallery or museum, and choosing instead to work in nature with natural materials, far from urban centres and the commercial art market. The influences ranged from minimalism, conceptual art and performative art practice to the environmental movement that was then gathering momentum, and the first images of the planet as a sphere in space, triggering the sense of the earth as an object, itself a substrate on which art could be made.

Working in natural settings, land artists mostly use materials found on the site: soil, sand, rocks and stones, branches and sticks, plants, leaves and flowers, feathers, mud, water. From the beginning, these works ranged from the monumental to the ephemeral – contrasting approaches exemplified by two early formative and influential works made on opposite sides of the north Atlantic.

A Line Made by Walking, the 1967 work by British artist Richard Long, came about when, as a young man on the way from his home in Bristol to St Martin’s art school in London, Long stopped in a field in Wiltshire, walked back and forth in it until a line became visible on the ground, and photographed the site that contained the marking of his presence.

In 1970, on the northeastern shore of Great Salt Lake in Utah, American artist Robert Smithson bulldozed 7,000 tons of rock and earth into the lake to make Spiral Jetty, a straight line from the shore turning into an anti-clockwise coil in the water, five metres wide throughout and 460 metres long in total.

Smithson was to die three years later at age 35 in a light aircraft accident while surveying a site for a new planned work in Texas, but Spiral Jetty still exists, today owned and maintained by New York’s Dia Foundation. The practice of constructing large-scale land art pieces continued with the work of Smithson’s wife, Nancy Holt, Michael Heizer and Walter De Maria, among others. Heizer, who was born in 1944 and is still active, has been quoted as saying: “It is just not my inclination to make small work.” Indeed. His 2012 work Levitated Mass consisted of a 340-ton boulder transported 170 kilometres to be installed above a concrete pathway at the Los Angeles County Museum of Art. City, on a site in Nevada two kilometres long and 400 metres wide – started in 1972 and still under construction – is one of the largest sculptures ever made.

In sharp contrast, eschewing the quest for permanence and monumentality, the work of land artists such as Richard Long, Andy Goldsworthy, Nils Udo, Bob Verschueren and Strijdom van der Merwe tends towards the ephemeral. Mostly conceived and crafted in solitude, in a contemplative and meditative spirit, highly attuned and sensitive to the natural surroundings, these works are sometimes minimalist, even intimate, often fragile and impermanent. 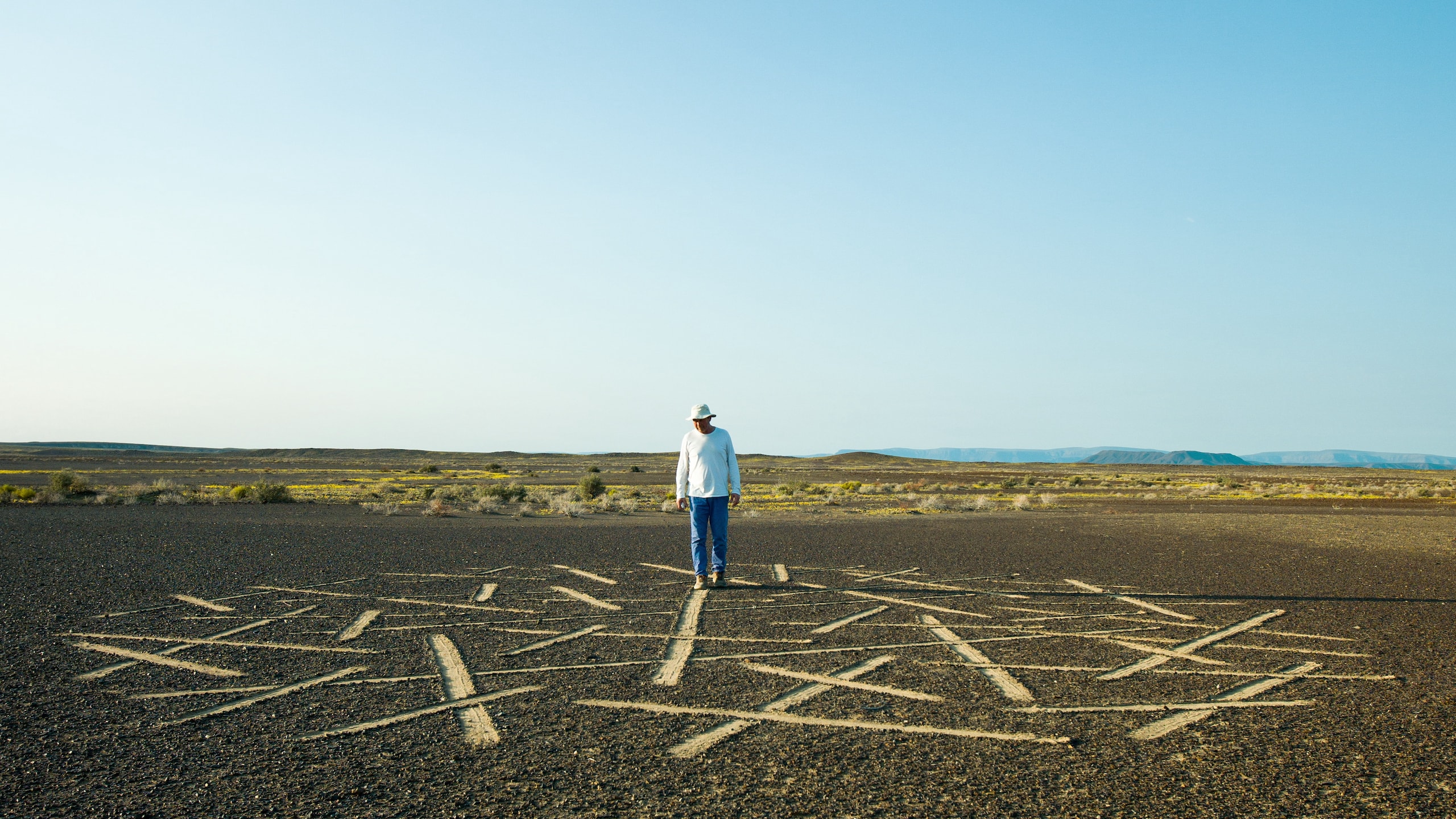 The creative output of prolific land artist Strijdom van der Merwe spans the globe, with commissions and installations completed over the past three decades in more than twenty countries. Strijdom has worked on invitation in countries ranging from Australia, Japan and South Korea to Turkey, Lithuania and Finland, from Namibia and Kenya to France, Italy and Sweden, from the Netherlands and the Czech Republic to the United States. He has made land art works on the pavement outside the Smithsonian in Washington DC, on the shore of Lake Neuchâtel in Switzerland, at Sossusvlei in the Namib desert, on the beach of Dutch island Terschelling, on a farm in Kenya, in the forest on Germany’s Sylt Island, in a river outside Kamiyama in Japan.

But his roots are in Africa. After growing up on a Highveld farm in the southern African interior he settled in the university town of Stellenbosch in South Africa’s Cape Winelands. Strijdom’s land art is characterised by humility in the face of the scales and cycles of the natural world – the fragile, fleeting artworks reflecting a sense of the ephemerality of human markings on the land, and presenting the viewer with an opportunity to contemplate the nature of human existence on the planet. 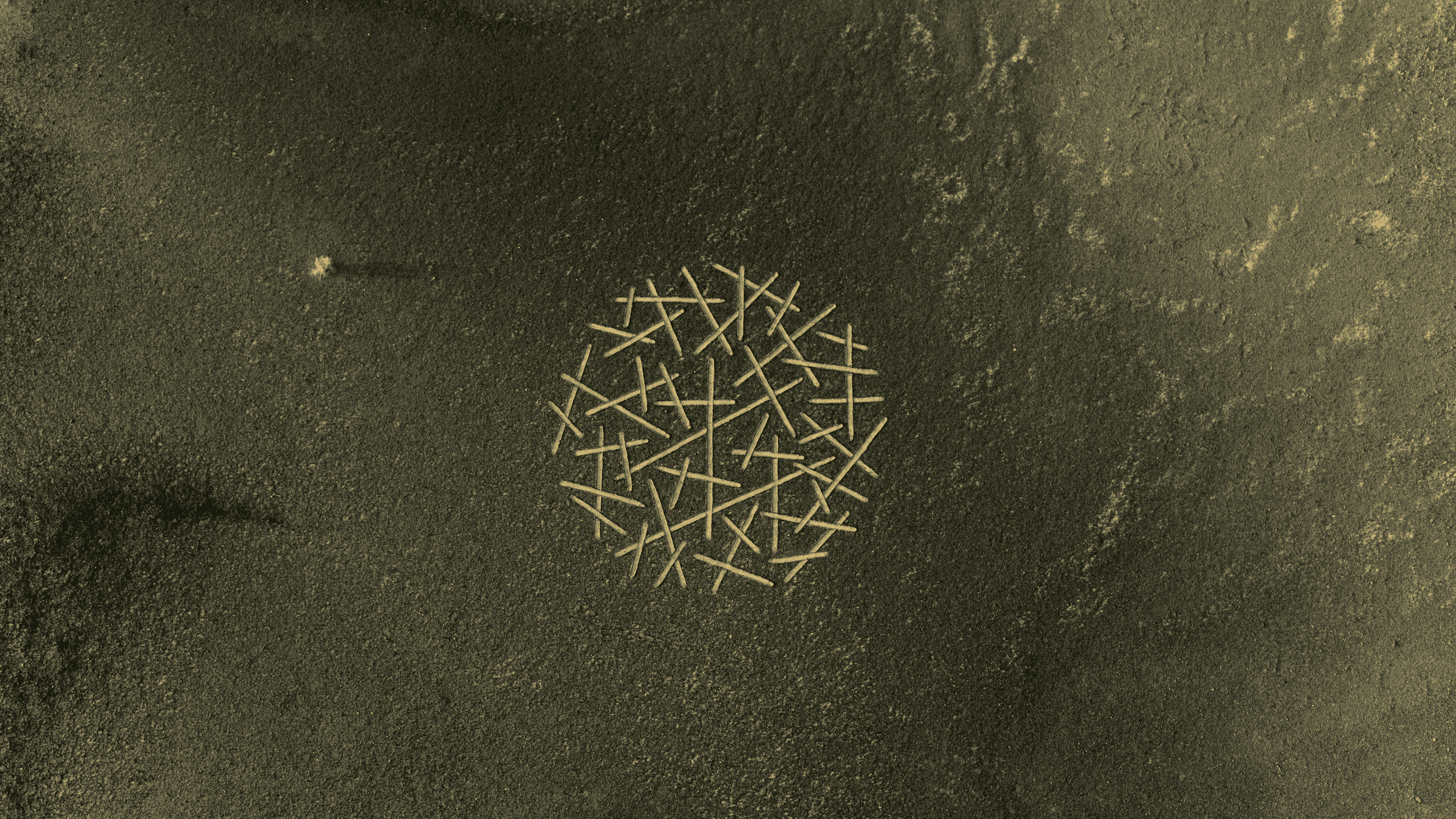 Strijdom and I met for the first time in May 2018 to discuss the possibility of making a feature-length film about his work. We started outlining and refining the broad contours of the undertaking and the envisaged completed film in a first round of project documentation and did a first test shoot.

Soon after, I embarked on a large multi-year film project to document the lessons from the Cape Town water crisis – then just resolved with 2018’s first winter rains – which would keep me occupied for the next two and a half years, so it was only at the end of 2020 that Strijdom and I could resume the thinking and planning for our joint undertaking.

We conceptualised the film as taking place over the course of a year – both as a project and as a completed work. Strijdom was born in June 1961, so 2021 would be the year he turned 60 – an appropriate milestone in his life and career as land artist for the documentation of his work in a film for a global audience. We would shoot Strijdom making land art works over the course of a year, and the film would portray these artworks taking shape in front of the camera, more or less – if not necessarily strictly – in shoot sequence.

With the notion of a complete year came naturally the idea of the seasons. The shooting, and the film, would start close to the southern-hemisphere summer solstice during the long days of December, continue through autumn and winter to arrive in spring and end with the completion of the cycle the following December. The film would take the viewer on a journey through the consecutive seasons, from summer to summer.

While the first two conceptual building blocks for the film revolved around time, the third was about place. Strijdom is based in Stellenbosch, so the film would show him throughout the year making artworks in the greater Stellenbosch area, a lush world of fertile valleys and verdant forests – Jonkershoek valley, Paradyskloof, the surrounding Boland, the beach in nearby Gordon’s Bay – but interspersed through the year with journeys to increasingly remote locations. 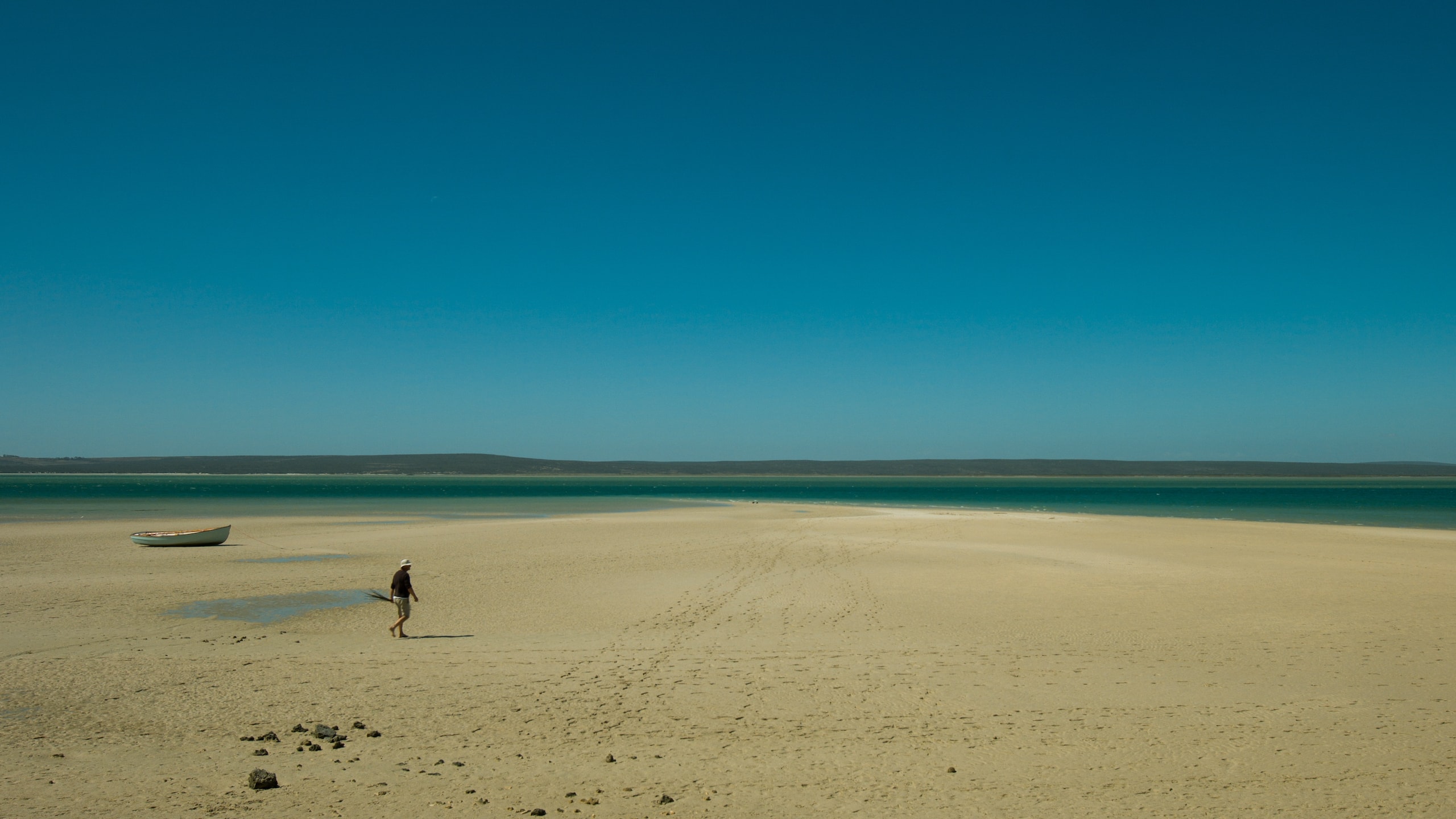 The first of these, only an hour and a half from Stellenbosch up the west coast, would be the idyllic setting around the tiny village of Churchhaven on the shore of the Langebaan lagoon in the West Coast National Park. Pristine, picturesque and peaceful, with the water level slowly rising and falling with the tides, the lagoon shore offered the perfect setting for artworks made from natural materials found on the site.

And then, further away, deeper into the southern African interior, and in contrast, would be the Tankwa Karoo – harsh and unforgiving, a semi-desert of dust and stones, a striking landscape of boundless open space and mesmerising, non-pastoral beauty. It would take three trips to the Tankwa – and between us a total of no less than five tyres either in need of or hopelessly beyond repair after contact with the notoriously sharp stones on the long dirt road to get there – but the images of the wide expanse of arid land, big sky, and Strijdom working in this stark landscape made it all worth it.

With the conceptual framework and the project planning in place, we started filming on 15 December 2020. But concepts require time, work and funding to be executed. The seasons were not standing still, so we continued shooting while working in parallel to secure funding. We were grateful therefore for the financial support of the project by Mike Spittal of Monaco. Mike is an enthusiastic art collector and a generous benefactor and supporter of the arts. His involvement in the undertaking has been pivotal to its successful completion. 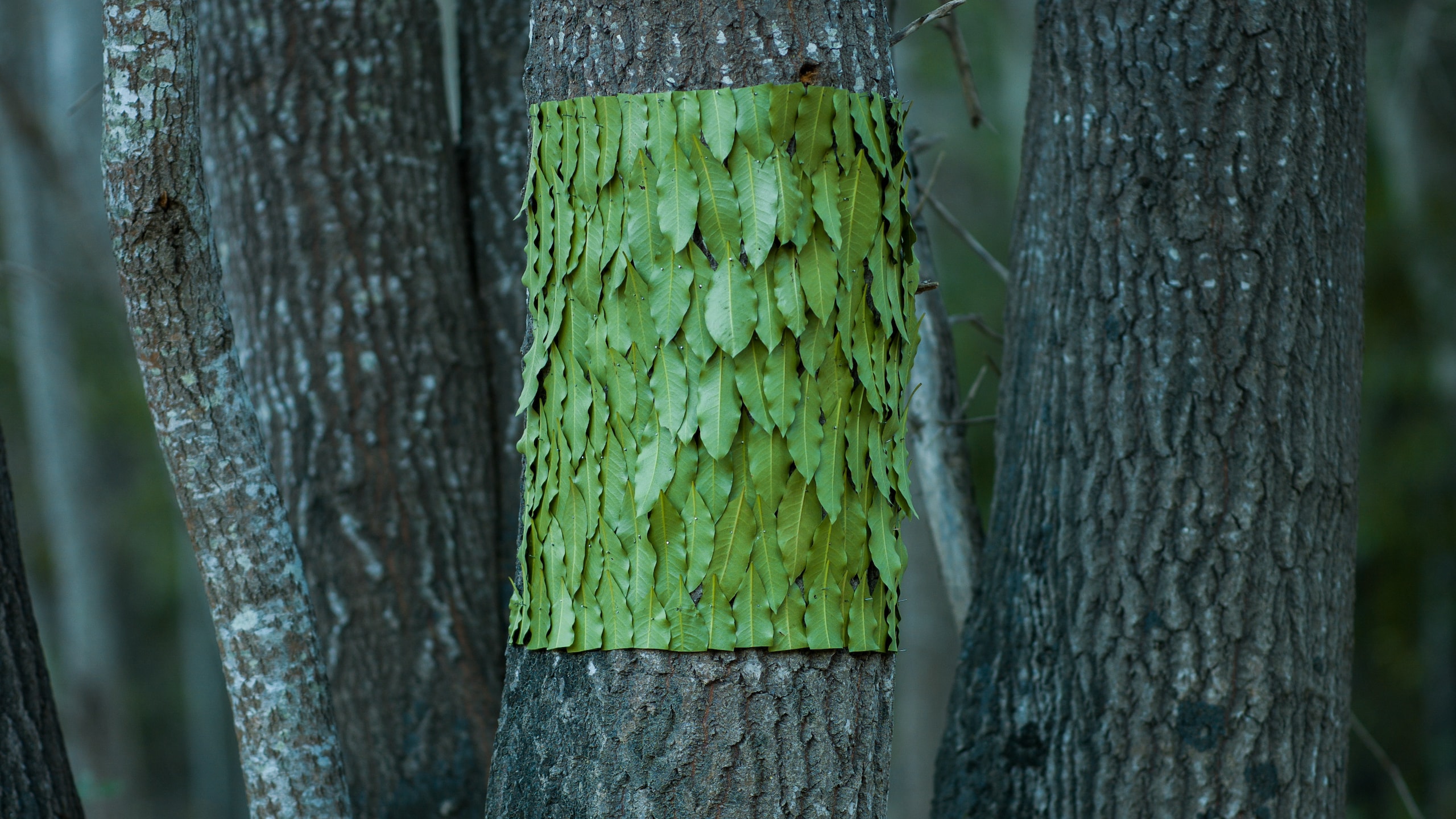 The title of the film, Sculpting This Earth, echoes the titles of Strijdom’s two books Sculpting the Land (2005) and Sculpting the Earth (2011). An aspect of the meaning of the inflection to “this earth” in the film title is a reference to this southern African earth, the subtext being that Strijdom works internationally but the film shows him and his artworks in the part of the world where he lives, where he is rooted, to which he has particular personal, emotional and artistic connections – and which also happens to be a land rich in ancient markings in the landscape left by its early human inhabitants.

For some, “this earth” in the title will evoke also the sense of the fragility of the earth in the face of environmental degradation and climate change. And the contrasting, darker connotation to the title is the very different sculpting of the earth of which we are all part, all of us living off the benefits of a global civilisation of agriculture, extraction and industry on a vast and unprecedented scale, the planetary implications of which are only now beginning to dawn on us. With global temperatures rising and extreme weather events increasing in frequency and intensity, faltering attempts at internationally coordinated action to limit the inexorable growth of greenhouse gas emissions, and the looming prospect of grim scenarios by the end of the century, future generations looking back at today’s art may yet be struck by how tumultuous the times were against the backdrop of which the art was made. 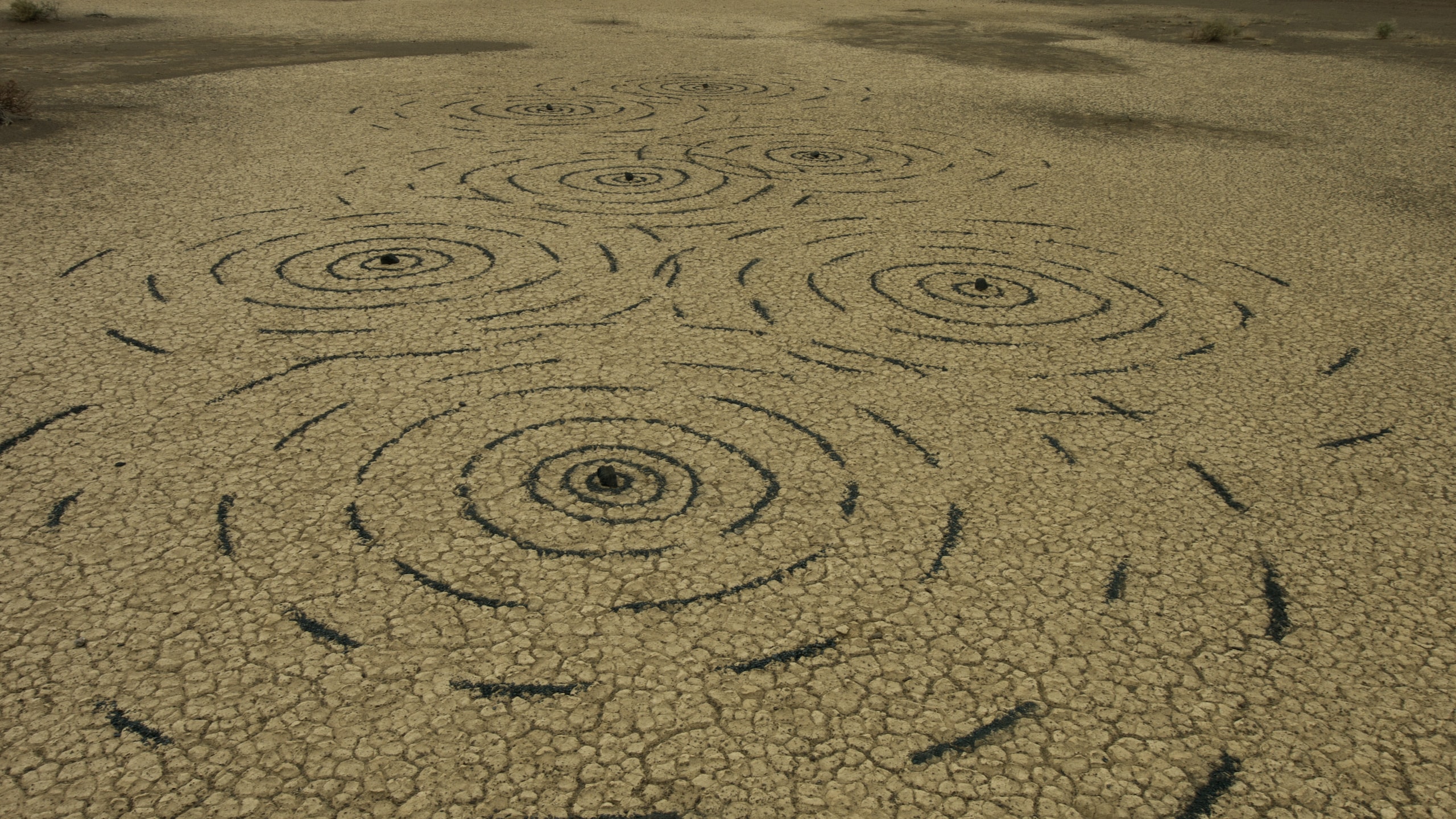 Land art, made in uninhabited places far from population centres, and often existing only fleetingly, relies on photography and film to connect to an audience. Yet, even though it has been practised for over half a century, only a small number of feature-length films have been made about it to date. Troublemakers: The Story of Land Art, the 2015 documentary by filmmaker James Crump, portrays the history of the pioneers of land art in the north American desert in the 1960s and 70s. Levitated Mass, directed by Doug Pray and released in 2013, tells the story of the transport and installation of Michael Heizer’s work in Los Angeles. And German filmmaker Thomas Riedelsheimer has made two films about the work of British artist Andy Goldsworthy: Rivers and Tides (2001) and Leaning Into the Wind (2017).

While land art is today practised around the world, the existing films about it still reflect its origins in the US and Britain fifty years ago. Sculpting This Earth is therefore not only the latest contribution to a sparsely populated genre. As the first feature-length film about land art from the southern hemisphere it also broadens the understanding of this art form and expands the scope of its presentation on screen far beyond the traditional boundaries of the northern Anglosphere.

Set entirely outdoors and far away from the built environment, Sculpting This Earth offers a sense of reconnection to nature and the natural world at a time when many people globally feel cut off from nature, and there is a widespread and growing realisation that the natural world is under threat and in many places in rapid and terminal decline.

Strijdom’s land art, made of materials known to people everywhere from their daily lives and surroundings, speaks a deeply universal human language, transcending all boundaries of country and culture, moving people with meaning and emotion, regardless of where they are on the planet. 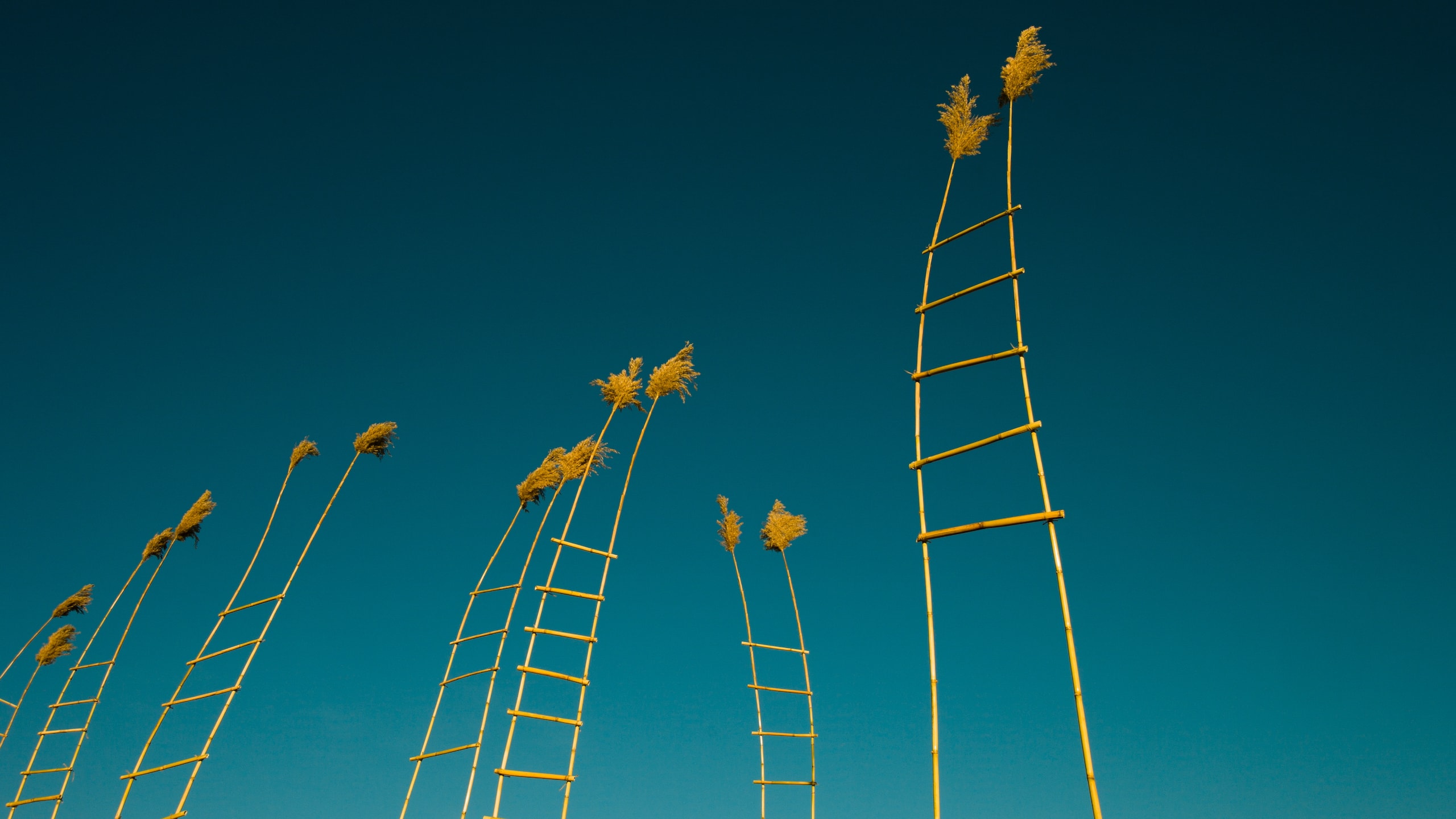 A version of this piece was published in the 2022 luxury edition of DEKAT.